The South Coast Chamber Music Series (SCCMS) was formed to present high-quality classical chamber music for the communities of Southeastern Massachusetts. SCCMS held its first subscription series concert on October 20, 2001. Since then, we have performed composers from Bach, Brahms, and Ravel to present-day masters Takemitsu and Piston.

Each program presents an engaging array of styles, timbres, and artists in lively acoustic environments throughout the Southcoast. We joined forces with the NBSO in 2014, giving both organizations an opportunity to expand in all directions—more concerts, more musicians, and more music—and are thrilled to connect with our loyal and growing audience.

This season we are delighted to welcome first chair players from the New Bedford Symphony to perform two concerts on our series. We look forward to the artistry and energy they will bring to our season, and we are grateful for their commitment to sharing the highest quality chamber music with our loyal audience. Here’s to an exciting and historic 2019-2020 season!

Her solo performances have been at the White House, Carnegie Hall, Wigmore Hall, Weill Hall, National Gallery of Art, Boston’s Symphony Hall, and the 92nd Street Y. She has performed at summer festivals in Newport and Bard and returns regularly to China for concerts and master classes.

Her eclectic recordings include the complete transcriptions of Rachmaninoff; with the Lydian Quartet, Leo Ornstein’s vast Piano Quintet; waltz transcriptions of Godowsky, Rosenthal, and Friedman; the world premiere recording of Liszt’s Transcendental Etudes in the notoriously difficult 1838 version; solo piano music of Leo Ornstein; and Messiaen’s Quartet for the End of Time.

Seascapes, a collection of virtuoso water music, was recently named one of “10 Notable 2015 Piano Releases” in critic Jed Distler’s influential keyboard blog. She has taught at New England Conservatory, MIT, and Brandeis Universit. Currently a member of the Boston Conservatory faculty, Miss Weber is the author of eight novels. Frost the Fiddler, her third, was named a Notable Book of the Year by the New York Times. She is the Artistic Director of South Coast Chamber Players.

Piotr Buczek was born in Chorzow, Poland. He began violin studies at the age of eight and graduated from the Karol Szymanowski Academy of Music, receiving a Diploma of Art with special distinction.

He was a founding member of the Penderecki String Quartet, with whom he made eleven recordings. Mr. Buczek was assistant to Ralph Evans of the Fine Arts Quartet in Milwaukee and has worked with Pinchas Zukerman, Yo-Yo Ma, Ursula Oppens, and Shlomo Mintz. While at the University of Maryland, he worked with Arnold Steinhardt and John Daley of the Guarneri Quartet.

He has performed throughout Europe, Asia, and the Americas. Mr. Buczek appears regularly with the Boston Modern Orchestra Project, Decompression Chamber Music and numerous ensembles in the Boston area. He teaches at The Rivers School in Weston and currently plays a 1902 Antonio Scarampella violin from Brescia, Lombardy.

Julia Cash is an active freelance musician and teacher in the Boston area. She has served as principal second and assistant concertmaster of Opera Boston, and she performs regularly with Boston Modern Orchestra Project, Boston Ballet, Pro Arte Chamber Orchestra, Chamber Orchestra of Boston, and as concertmaster of Alea III new music ensemble. She is also an active chamber musician, performing in venues across New England.

Cash is currently on faculty at New England Conservatory Preparatory School, Boston Latin School, and the Boston Youth Symphony Orchestras. During the summer, she teaches at Point CounterPoint Chamber Music Camp in Vermont.

She holds degrees from the New England Conservatory of Music, the Staatliche Hochshcule für Musik in Trossingen, Germany, and the Dutch Royal Conservatory of Music in The Hague. As a fellow at Tanglewood Music Festival, she received The National Music Clubs Award for outstanding performers.

Boston-based cellist Leo Eguchi has been described as “copiously skilled and confident” (New York Times) with performances that were “ravishing” (New Bedford Standard-Times) and “played with passion and vitality” (Boston Music Intellegencer).

A native of Michigan, Leo has performed extensively across North America, Europe, and Asia. He is principal cellist of the New Bedford Symphony; a member of the Pro Arte Chamber Orchestra, the New Hampshire Music Festival, and the Portland Symphony; and frequently appears with the Boston Pops and Boston Ballet.

Violist and violinist Anna Griffis performs as a soloist, chamber musician, and orchestral player throughout the U.S. and abroad. She made her concerto debut with the Baltimore Symphony Orchestra at age 16, and was second prize winner in the 2008 Van Rooy Solo Competition.

Anna studied violin performance at Lawrence University and The Hartt School of Music and received her Masters and Diploma in viola performance from Boston University as a student of Michelle LaCourse. She is on faculty at the Dana Hall School of Music, maintains a private studio, and serves as the Coordinator of P.R. and Box Office for the Tufts University Music Department.

EmmaLee Holmes-Hicks received her doctoral degree from SUNY Stony Brook, studying violin with Phil Setzer, Soovin Kim and Philippe Graffin. She completed her undergraduate work with honors at the Cleveland Institute of Music where she studied with Stephen Rose and Annie Fullard.

As a chamber player, she has enjoyed the fine coaching of both the Emerson and Cavani String Quartets. She is on faculty at the University of Massachusetts, Dartmouth and the Birch Creek Summer Performance Center and she serves as co-director, resident musician and teacher at the Newport String Project in Newport, Rhode Island.

A firm believer that music can move people, quite literally, EmmaLee takes the lead in string bands across New England and in the Midwest where her lively fiddle music drives the spirited old-time dancing.

She has played fiddle with the Rusty Pickup String Band since she was ten years old and she has taken many a championship prize at fiddle competitions.

Jesse Holstein graduated from Oberlin where he studied with Marilyn McDonald and received his Master’s degree with James Buswell at the New England Conservatory.

An active recitalist, orchestral and chamber musician, Jesse is currently concertmaster of the New Bedford Symphony. In recent summers, he has performed at the Bravo Festival in Vail Colorado, the Montana Chamber Music Festival in Bozeman, the Bay Chamber Concerts in Rockport, Maine, and the Apple Hill Festival in Sullivan, New Hampshire.

Since 2013, he has been on the faculty at the Greenwood Music Camp at the foot of the Berkshires in Cummington, Massachusetts. Currently, Jesse is a teacher and resident musician for Community MusicWorks, a youth and family-mentoring program that provides free instruments, lessons and a variety of programs for youth in urban neighborhoods in Providence.

He is also a founding member of the Providence String Quartet. Jesse has been a Violin Professeur at L’Ecole de Musique, Dessaix Baptiste in Jacmel, Haiti. He currently is on faculty at Brown University and Providence College.

Praised by the Boston Globe as “noteworthy among the solo voices” and as giving his instrument “a soulful workout,” violist and violinist Don Krishnaswami has collaborated in chamber music with current and former members of the Boston Symphony Orchestra and is a founding member of the LiveARTS String Quartet.

Mr. Krishnaswami holds a Master of Music degree in viola and a Bachelor of Music degree in composition from The Juilliard School. The Swordfishers, his latest work, was premiered by Boston Landmarks Orchestra at the Hatch Shell this summer. He plays a modern Italian viola made in Naples in 1916 by Armando Altavilla.

Violinist Megumi Stohs Lewis has soloed with orchestras throughout the U.S. and Japan, and has toured with ensembles throughout Australia, New Zealand, and Europe.

In 2008, Megumi picked up the baroque violin which led to performances with Boston Baroque, Les Bostonades, and the formation of Antico Moderno. She also loves to fiddle and play rock and has regularly toured with Britain’s Jethro Tull.

Timothy Roberts is an active chamber and orchestral musician and teacher, performing with such diverse groups as the Smithsonian Chamber Players, the Brandenburg Ensemble, Alea III, and the New England Ragtime Ensemble.

He has performed with the Boston Symphony Orchestra, the Boston Pops Esplanade Orchestra, the Florida Orchestra, Rhode Island Philharmonic, Pro Arte Chamber Orchestra, Portland Symphony, New Hampshire Symphony, and the Opera Company of Boston. Mr. Roberts founded the Art of Music Chamber Players, performing more than one hundred concerts across New England, and has just returned from his tenth year with the Carmel Bach Festival in California. He is currently Musical Director of the popular Copley Chamber Players and maintains a significant private teaching studio. 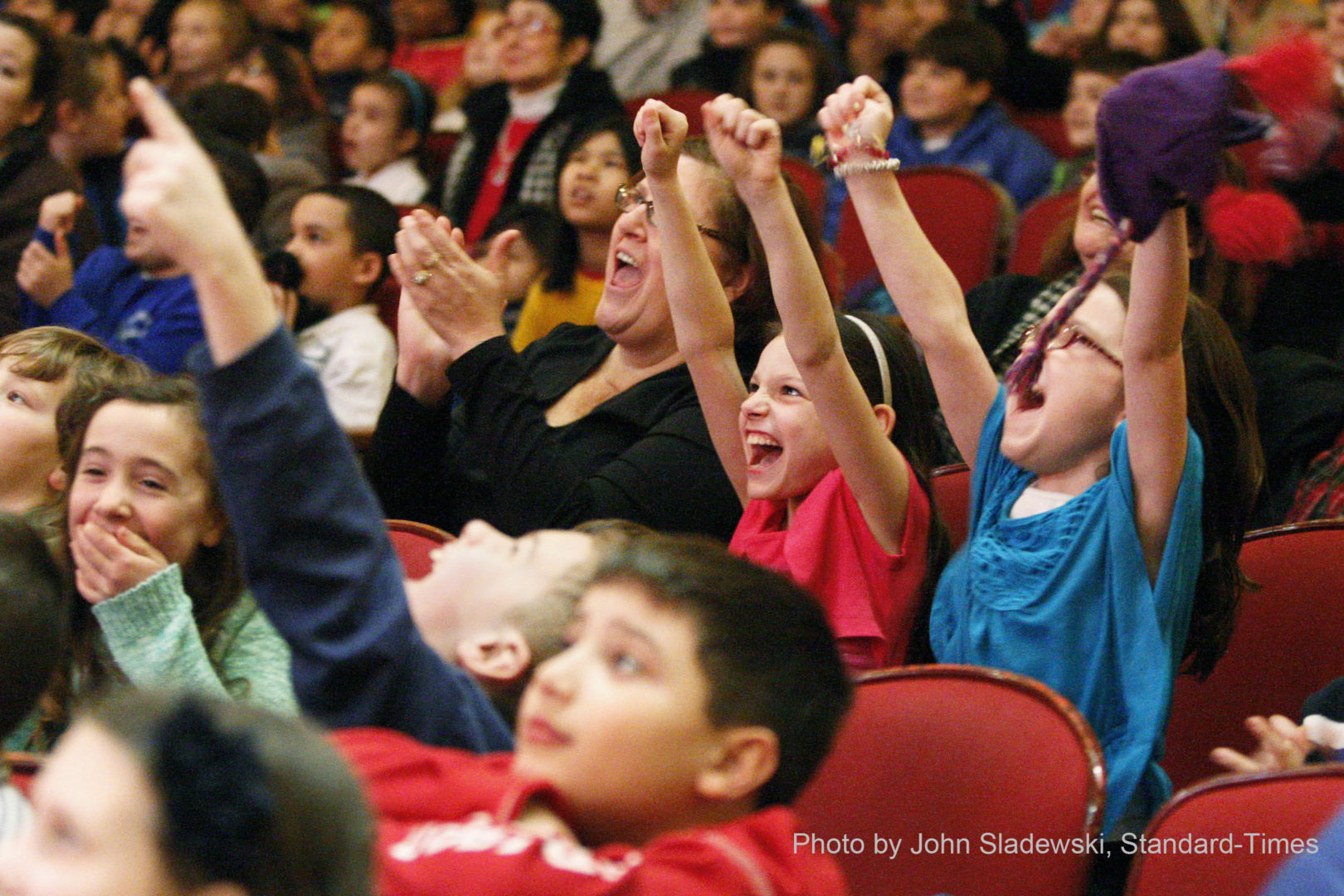 Our educational programs serve over 25,000 children a year, and we are recognized nationally for our innovative approach and high impact. We all know of the documented benefits of children learning music, and we firmly believe that by introducing classical music to a new generation of students through our programs, we are helping them to make critical connections between music and their everyday lives, making their NBSO experience enriching on multiple levels.